Ron Stewart is a painter and sculptor of western, historical, wildlife and animal subjects. Although born in Brooklyn, New York, Mr. Stewart moved to Scottsdale, Arizona where he opened a highly respected studio, where visitors and art collectors can walk in and watch him painting and sculpting traditional old western themed fine art. In the over-crowded field of contemporary western artists, Ron Stewart’s professional achievements have made his work familiar to a wide range of discriminating collectors. Ron is among those who is tied hard and fast to the quality of painting and the historical fidelity of the Old West Masters. The refined artistic abilities, in watercolor, oil, and bronze, are truly distinguished, but Ron brings more to his work than just the technical competence of a western illustrator. The Ron Stewart hallmark is the representation of the mood and the atmosphere appropriate to whatever he approaches. His paintings breathe life into the dusty pages of western history, be it the bawl of longhorn cattle, the war whoop of the red men, or the mountain man in his wilderness solitude. Ron has received awards multiple times at the competitive Death Valley Invitational (5), the George Phippen Memorial (3), and Best of Show, and Best Watercolor at the Pikes Peak National Invitational Show (2), and he also received numerous awards at the Western Artist of America, including three gold medals in Watercolor, two Silver medals in Watercolor, and one Silver medal in Oil, and one Silver medal in Bronze. Mr. Stewart has exhibited throughout the West in juried and group shows, collecting a variety of top awards for his art, including numerous gold and silver medals in oil, watercolor, bronzes, and drawing. Mr. Stewart’s art is in numerous prestigious and private international collections located in England, France, Germany, Italy, Denmark, Spain, the Philippines and Japan. 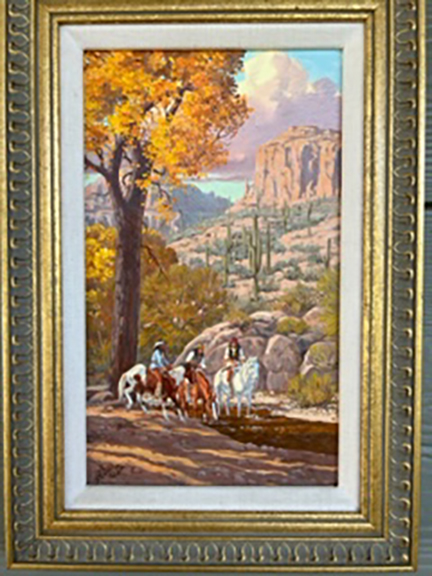